Complexity theory challenges the dominant tradition of what is deemed ‘scientific’ and ‘professional’. It questions whether we can act as if the world behaves like a machine – is predictable, can be divided into parts, and defined by unambiguous cause-and-effect links. Complexity theory emphasises that the social and natural world is organic, systemic, shaped by history and context. Things are affected by many causes and connections and these act together, synergistically. The future emerges, cannot entirely be known in advance. What happens next is affected by history, chance, choice, and the particularity of the local context.

Complexity theory suggests that organisations and markets and ecologies and communities are:

The underlying premise is that the complexity of the world is something to be embraced – not ignored or seen as problematic. To assume things are stable and predictable when they are not does not lead to success. And diversity and complexity are necessary, lead to resilience and adaptability. Allowing diversity and multiple pathways ensures things have not become so efficient that there is little potential to be flexible, to adapt if things change, as they inevitably do.

The Wiltshire folks were in a dither
Because of Heraclitus’ river
They knew they could not cross it twice
But were not clear would once suffice?

And then at last a quite astute ‘un
Remembered dear old Isaac Newton
Who was a marvel in his season.
And never was he contradicted,
He said that all could be predicted
And we could all rely on Reason.

And so they dropped all their ferment
And settled on Enlightenment
And all would have continued charmin’
Apart from that annoying Darwin
And his ideas of Evolution
For which, it seems theres no solution.

This led to quite a sense of urgenc-
Y and focus on emergence;
The physicists tried to ignore it
The social scientists deplored it!
The Christians were not too keen

But then into this sorry scene
Came the Russian Belgian Prigogine
Who said, “Don’t fear, science isn’t broken
‘Cos things thought closed are in truth open;
There is a theory quite supreme
Which fits experience like a dream.”

The Wiltshire folk who’d felt at sea
Poured yet another cup of tea
And marvelled at Complexity. 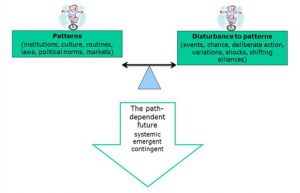 In relatively stable situations, patterns of relationships tend to form friendship groups, political norms, organisation culture, who buys what from whom, and in ecologies (and corporate finance) who eats whom! But these patterns are constantly at threat of being destabilised by events, by variations in behaviour, by shocks, by shifting alliances, by new technologies. So the future depends on the extent to which the status quo is affected by such ‘events’. It is dependent on the particular path, the particular sequence of events; what emerges depends on the precise combination of factors and cannot be predicted in advance nor understood through looking at averages and stable conditions. 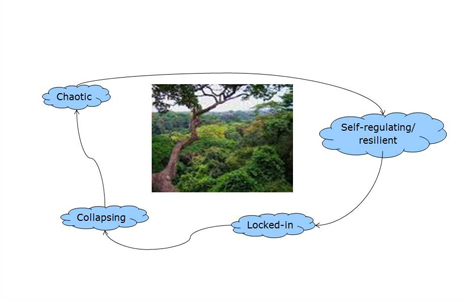 One of the factors to consider in deciding how to operate in a complex world is to judge the nature of the context. The lifecycle of a forest, building on Holling’s work goes through different phases. As it grows and matures it becomes resilient, with multiple pathways, options as to who eats what and whom, variation over the range of the forest. Over time, it becomes more ‘efficient’, less diverse and less resilient, with fewer options, fewer alternative pathways to be able to adapt if things change. This is the ‘lock-in’ stage. This is often followed by collapse as the forest is unable to deal with shocks and change. And the next phase is chaos, with lots of diversity but few established pathways and relationships. Applying this thinking to the social world suggests the following strategies.

I am old enough to remember how we used to work before the current ‘managerialist’ tendencies set in, and it was pretty much as you advocate (in terms of understanding change, working from the bottom-up, and relating to the bigger picture). Your description of the application of complexity theory is really a description of what ‘good participatory management’ should be all about.

Understanding the complex world, and understanding the science and theory that informs this, has been a burning interest of mine for many years. As a physicist turned social scientist, my interest is in getting to grips with the lessons from this ‘evolutionary science’ of ‘open systems’ and seeing what they may mean for the social and natural world, and how they impact organisations as well as affect us as ordinary people living our lives.

There are many articles, papers and references in the Resources pages which give much more information about these ideas. For straight forward introductions read Leadership in a complex world or Managing in an Age of Complexity.

This Interview with Peter Allen, to whom I owe a great deal, is a great summary of complexity and explains some of the history.